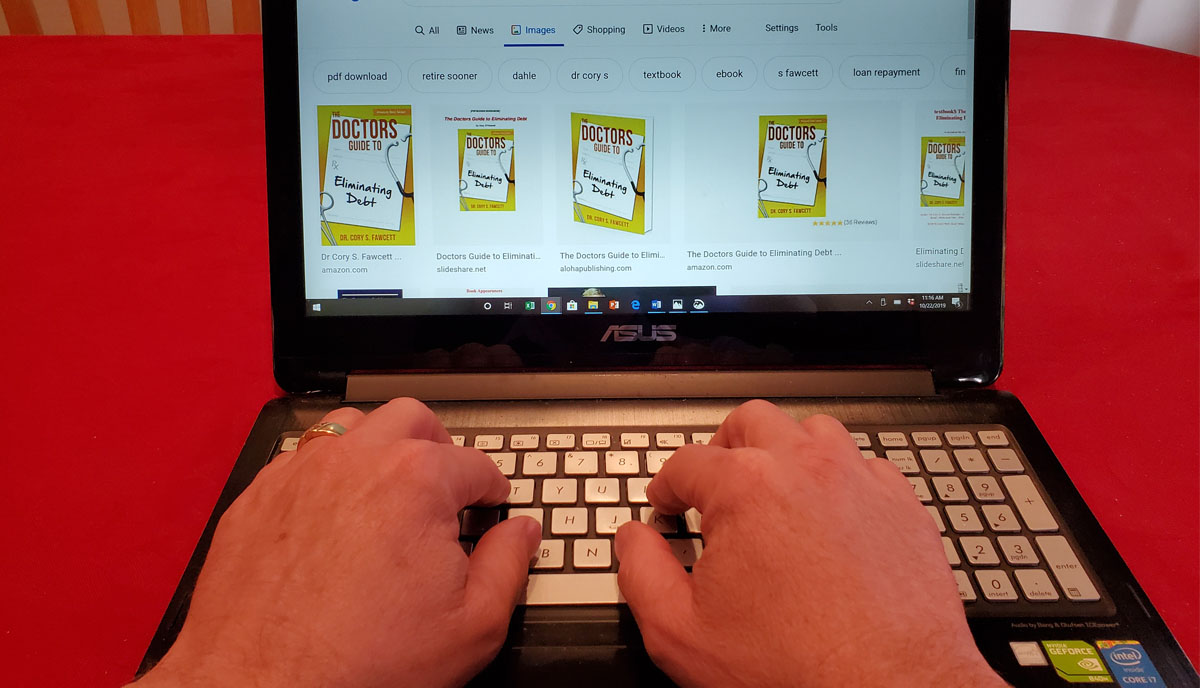 Sometimes a financial makeover client of mine really takes the bull by the horns and drastically improves their financial situation in a very short time. It’s amazing how fast goals can be achieved when you really go for it. I was so amazed by one such student, I asked him to tell his story of transformation. He chose to remain anonymous, but those of you who are struggling with an immense debt burden will find hope in his story. Keep in mind as you read, this was all done in only six months. I hope you are inspired by his story.

I was awake for yet another late night contemplating the fastest way to pay off my nearly $680,000 of debt. Sickened by the amount of money my wife and I have let slip through our hands year after year, I felt driven to do something different. We were both physicians making great salaries, yet we had nothing but debt to show for all our effort. I sat at my computer and Googled “How to get out of debt quickly.”

I always thought our debt problem was fairly simple to fix: Sell our home, rental property, and both luxury SUVs, using the equity to get the ball rolling on eliminating our debt. We could move into a two-bedroom apartment, send my mother-in-law to my sister-in-law’s and live like paupers. All our finances would then be directed toward the remaining debt, which would be $250,000 in student loans. Of course I also wondered if I might become single if I tried that.

The next day I tested the waters by informing my wife of the plan to pay off our debt by selling everything and moving. She suggested I “come up with something else.”  I went back to searching Google and that’s when Dr. Fawcett’s book, The Doctors Guide to Eliminating Debt, came to my attention. I immediately ordered the Kindle version and read the entire book in one sitting that day.

Everything Dr. Fawcett said in his book resonated with me, but I still felt stuck and didn’t know what to do next. His email address was listed in the back of the book so I decided to contact him and thank him for sharing his story. I mentioned our debts were similar to what he paid off in his story in chapter one, but I felt I could never accomplish what he had done in paying them off. He wrote back, thanking me for my comments and offering to help us through his coaching services. I was so excited by the possibility of him helping us become debt free. I was also shocked that he would take the time to help us. We set up a call to go over the details.

Little did I know that our conversation would change my life and set me on a trajectory to a financial success I could have never imagined. After a long discussion of our financial situation, the choice was up to us. I hesitated at the price initially, but he made me an offer I could not refuse, “If you don’t like what we are doing in 30 days, I’ll give you all your money back.” We couldn’t turn that down.

We were filled with excitement, finally feeling like we were going to get the help we needed. Our current financial situation made our first few conversations seem grim. Dr. Fawcett pointed out that we were a HENRY.  I asked him “what’s a HENRY?” He said, “It stands for High Earner, Not Rich Yet.” That statement made me feel something that wasn’t good.

But there was also good news; he felt we could not only pay down the debt we had, but we could also put away money for retirement and still do some of the fun things we wanted. My wife and I love to travel with our kids. We would be able to do that if we budgeted for it and planned ahead instead of borrowing money to travel.

So, this is where the hammer hit the nail on the head.  Dr. Fawcett worked with us going line by line through our expenses, which we tracked on Quicken, to establish a proactive spending plan (budget). With a close look at the last quarter’s spending, I realized I spent $6,000 dollars in clothes alone and was in shock. That category instantly dropped to zero. Eating out, groceries, and everything else we were spending was totally out of control. I hadn’t realized we were spending $1,600 on our housekeeper! We were over extended. This eye-opening exercise alone was worth Dr. Fawcett’s fee.

Once we settled on a more appropriate spending plan. We cut back on the housekeeper to just one day a week saving us $1,400. We found many other expendable expenses; weekly massages, manicures and pedicures, were a few of the things I gave up, while my wife found even more things to cut back on. Dr. Fawcett laid out exactly what we needed to do: We had to increase our contributions towards our retirement, start paying down debt, and add a category to put away money towards our traveling.

At the time, my wife’s family was living with us as they had just moved here from Antigua. They had cash for a down payment on a home, but did not qualify for a mortgage. We didn’t have any cash, but could qualify for a mortgage (I couldn’t believe they would give me a third mortgage with all this debt).  Here was the perfect opportunity to sell my current home and buy a home big enough for both families to live together and share expenses. This seemed better than my prior idea of moving into a two-bedroom apartment sans the mother-in-law.

I convinced my wife and mother-in-law that this was the right thing to do. My mother-in-law gave up her nice cottage for a bedroom and my wife gave up the home she so loved. I told them it would jump start this entire debt freedom process and I only asked that they give it a try.

We purchased a new home for our extended family to share and began prepping our other two houses to be sold. I paid 2 ½ mortgages for a few months. Then the first house sold and netted us $103,000. We used that money to pay off my student loans, all the credit cards, my wife’s car, and the renovations we made to get both houses on the market. The new housing arrangement was saving us quite a bit of money each month. We used this savings to increase our contributions to our retirement accounts. We were also able to increase our tithe to our church, which was something I had wanted to do but couldn’t seem to afford.

The rental property sold shortly afterward and netted us another $40,000 which paid off the other SUV. We were rolling now! Aside from our new shared mortgage, we only had the medical debt and my wife’s student loans left. Then some long-expected money finally came to fruition.

We were involved in a hit and run in 2017 that left a man dead while he was trying to save the four of us. God rest his soul. They never found the driver. Our uninsured motorist policy finally came through, which paid our medical bills and an additional $60,000 for our injuries. Applying this money to our remaining debt left us with only my wife’s student loans and our half of the home mortgage. We did, however, use some of that money to make our half of the new home comfier.

I couldn’t wait to tell Dr. Fawcett. “Who’s a HENRY now?” I thought. We had suspended working together on the finances during the six months I was completing the above transactions as I had a lot on my plate. He was really impressed with our progress as we discussed the next step.

We needed to work up to six months’ worth of expenses in an emergency fund, boost our retirement plan contributions, and begin paying down the student loans. I finally felt like I was gaining true financial independence and freedom from debt.

I asked Dr. Fawcett if I was still a HENRY and he said, “Sure you are.” Disappointedly, I asked when I will no longer be a HENRY. I thought since I had paid off all this debt, surely I’m not a HENRY anymore. He said, “When you’re rich. When you to have a million dollars in the bank. Then you won’t be a HENRY anymore.”

For the first time in my life, I feel like I can achieve that. I no longer wonder if I should pay debt, save, or invest. The question has been answered for me. The best part of this for me was the increase in giving to my church. We have had so many unexpected blessings…even as I write this I received a check from my dentist for $473 after my insurance picked up the cost of some recent dental work. My wife’s employer offered to pay $20,000 towards her student loans every year she continues to work for them. They also offered her a $70,000 raise. A car we lent to a friend was returned unexpectedly. Since we did not need 3 vehicles, we sold my luxury SUV, and put 3 months expense away in our emergency fund. My goals before the end of 2019 are to max out all four-retirement accounts, have 4 months’ worth of expenses saved in our emergency fund, start two backdoor Roth IRA’s, and put a significant amount of money towards our upcoming spring break vacation into our savings account.

It’s hard to fathom just how much that one Google search 6 months ago has affected our lives. I can’t thank Dr. Fawcett enough for his willingness to be honest about his struggles with debt as a physician and his desire to see others become financially independent. He has changed our lives forever.

I don’t necessarily advise people to sell everything to get out of debt, but that is what he was compelled to do. He wanted to make a drastic change. If you think you need help with transforming your financial situation, consider participating in my financial makeover program, or reading The Doctors Guide to Eliminating Debt.  I hope this one family’s story will inspire you to make some major changes in your life and jump start your journey to financial independence. Many similar stories to this one are what inspired me to teach financial principles to doctors in my retirement years. I didn’t retire, I repurposed. And I’m having a lot of fun with my new purpose.

3 thoughts on “The Google Search that Changed My Life Forever”