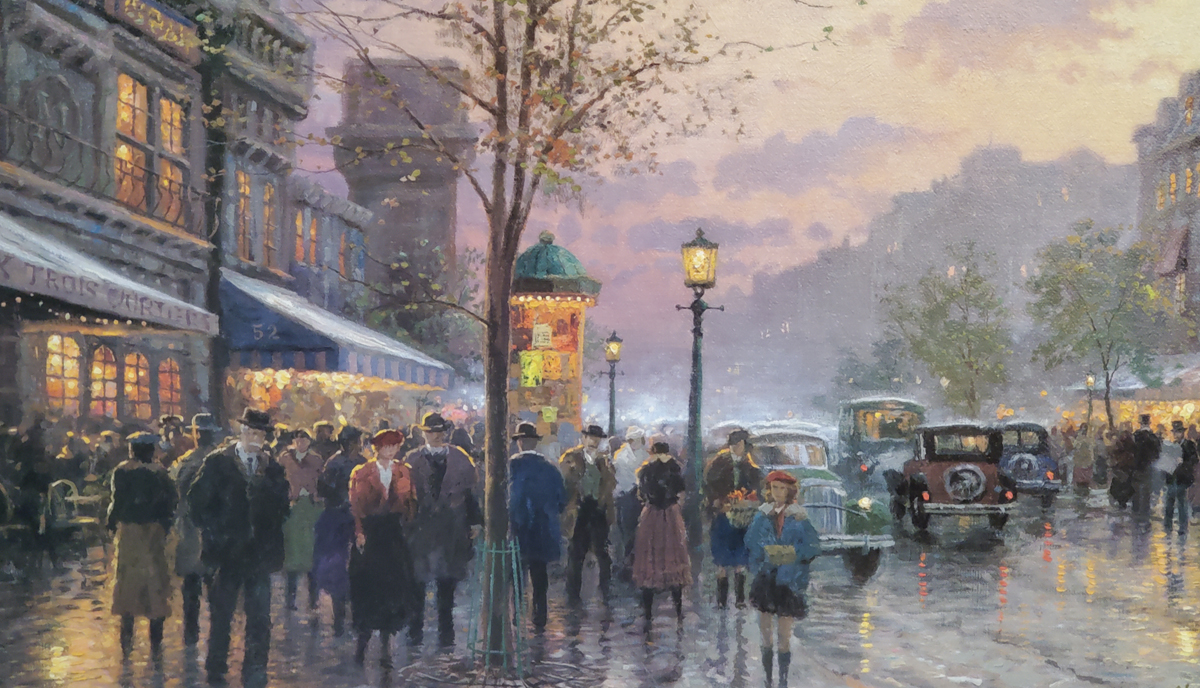 Merry Christmas to all you readers who make my writing efforts meaningful. Every time one of you writes to me saying an article or a book changed your life, you give me a great gift. I would love to give each of my readers a special gift. Continue reading to learn how to receive this special Christmas gift.

This morning while on the way to my office to write this Christmas article, without my topic finalized, I stopped to admire a picture painted by Thomas Kinkade that hangs in our living room depicting a typical street in Paris. Every time I see the picture a flood of fond memories comes over me, which is the very reason it hangs prominently in my home and was the first picture to be hung after we redecorated the house. It was the final gift I received from my Grandma Brown.

My wife and I were about to leave on a six week 25th wedding anniversary trip to Paris, which would also include multiple other cities in France and Italy. This was also just a few months before I would be retiring from my twenty-year surgical practice at the end of 2013. It was a trip I had been looking forward to for years and would be our first-time traveling outside the Americas. Thus there were several important life events tied to this trip.

Grandma loved to go to garage/yard/estate sales and hunt for special treasures. She had been on one of these treasure hunting endeavors when she saw this painting for sale. She knew our trip to Paris was a milestone wedding anniversary and thought this beautiful painting would bring back memories for years to come. She had no idea that a seemingly minor accident would soon transform our lives and how this picture would remind us of it forever.

While we were enjoying ourselves in France we received an email from my mother telling us that grandma had fallen when a kitchen chair she was sitting in gave out. The fall had broken her neck and she was to have surgery to stabilize the fracture later that day. She was 85 years old with early signs of Alzheimer’s disease, but still living on her own. Grandma asked that we not cut our special trip short on account of her “little accident,” as she was not paralyzed.

Unfortunately, she did not do well with the surgery. The neck was fine, but she had a big setback on her dementia journey. Post operatively she went to a nursing home to recover and never returned to her home to live independently. She spent the rest of her life in a memory care center and did not remember who I was on many of my visits. By the time of her passing about 2 ½ years later, she could no longer speak, walk, or remember anything.

Every time I pass by this picture I am reminded of her and all the love she gave me throughout my life. It also is a reminder of our 25th wedding anniversary and the great time my wife and I had for that six weeks together.

As I thought about those memories, I looked around the room and saw so many other memories. It dawned on me that my life was full of gifts, just like this picture from Grandma, that were reminders of great moments in my life. I took out a pencil and paper and started walking around the house listing all the gifts I saw, only stopping after the list entered the third page. How had I never noticed this before?

I notice the grand piano and remember how my parents gave me the gift of 54 years of music. When I was six years old my father bought a piano for his wife and it came with two free lessons. Mom was not able to take the lessons at the time, so I was given those two free lessons, which expanded to six years. I eventually formed a successful rock band, recorded an album of original music, heard one of my songs on the radio, played for the vice-president of the United States, performed on television, led the Community Christmas Concert for several years, was a worship leader at church for just short of 25 years, performed in several weddings and funerals, was cast as the lead in a musical, and sang to my bride at our wedding ceremony to name a few spin offs of that one gift. This Christmas season we are hosting five events bringing people into our home for an evening of Christmas Caroling. Our living room has become a concert hall as a result of those two free lessons my parents gave me.

Above the piano on the entertainment center sits a small red spring, a gift from Carolyn’s aunt Etta. Next to the spring is a picture of the covered wagon the spring once supported. Carolyn’s great-grandfather, who emigrated from Switzerland in 1867 at the age of 18, drove that wagon along the Oregon Trail for 2,500 miles from Canton, Ohio to Portland, Oregon in hopes of giving his family a better future in the Promised Land out west. Many of his descendants live in Oregon today because of his journey depicted by this 150 year old spring.

Sitting in the corner of the dining room is a blue wooden high chair. This chair was purchased by my grandparents about 80 years ago to feed my father as a baby. I used it when I was young, my son’s used it and currently my grandson is using it, marking four generations of Fawcett children who have eaten in that chair.

The kitchen holds dozens of memories that come out frequently to be used in our lives: the fine china, that bears my wife’s name, we received as wedding gifts; the etched glasses used for my parent’s 50th wedding anniversary; a glass etched cake dome and display pedestal given to Carolyn after serving as the coordinator for the local chapter of Mother of Preschoolers (MOPS); multiple custom mugs, including the mug presented to me by the director of the first play I performed in four years after starting my surgical practice; the pancake griddle my parents gave us for a wedding gift holds a lot of great memories of family breakfasts; and the popcorn popper Carolyn’s parents gave her for Christmas when she was a freshman in college is still making memories on movie nights.

There are hundreds of gifts in our house that spark special memories. What gifts do you see as you walk around your house that have sparked years of memories for your family? Do any of them bring tears to your eyes when you think about what the gift truly signifies? Like the nativity scene that reminds us of what Jesus did for us, or the final gift from a loved one. What gift can you give to someone that will become a cherished memory for decades to come? I challenge you to walk around your house this Christmas and think about the memories you see.

In the gift giving spirit, I would like to offer you, my readers, an autographed copy of one of the six books I have written that you feel would help you the most at this time in your life. Simply send me an email from the email address you have recorded with me. Specify your name, which book you would like, and the address you would like it mailed to. This gift will be given to everyone who requests it before midnight on New Year’s Eve. If you are not currently receiving my emails, first sign up using the form on the left column of my webpage and then request your book as a new reader.

I hope this Christmas is full of great memories for you. One of mine will be my second grandson who is due today, December 22nd, and I can’t wait to meet him.

1 thought on “The Eternal Effects of a Simple Gift”