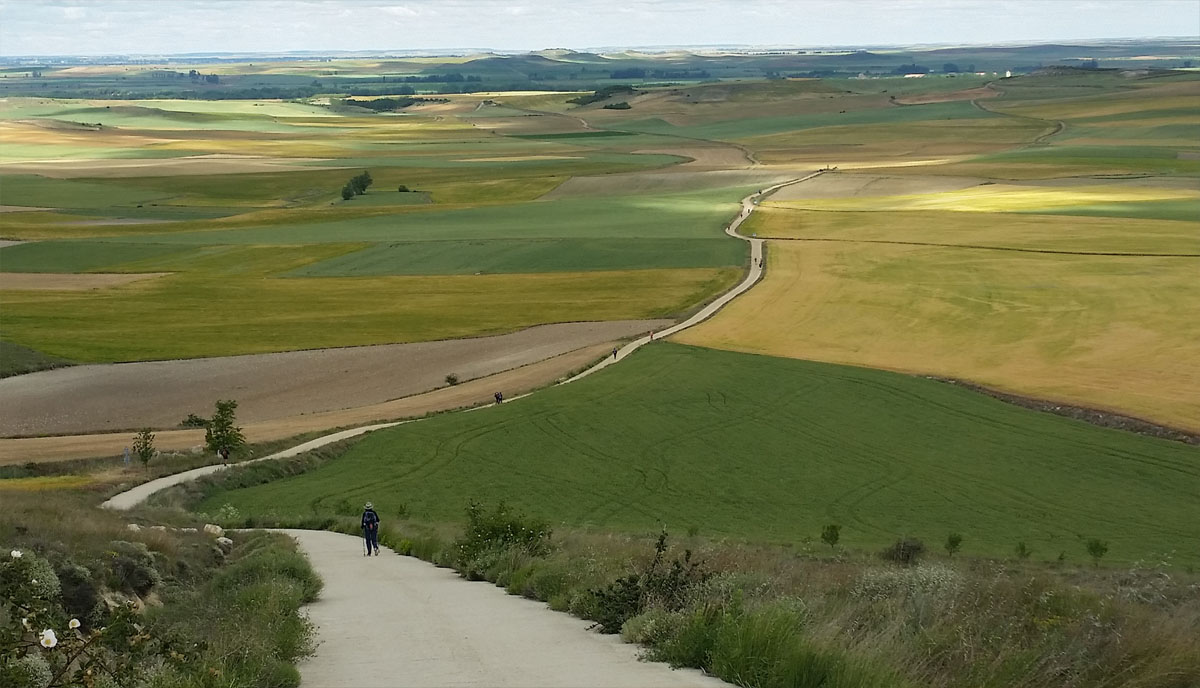 There are things on our bucket lists that take preparation and a great effort to accomplish. Climbing Mount Everest, for example. Others take a lot of time to complete, like an around the world cruise. My wife and I just finished one of these bucket list items that took both a lot of preparation and a lot of time. We walked the Camino De Santiago in Spain. It was a 450 mile backpacking adventure that spanned 38 days.

For those unfamiliar with this pilgrimage, I will give a little background. One of Jesus’s apostles, James, after his death, was brought to the coast of Portugal to be buried. His body was later moved to where a cathedral in Santiago (which means Saint James), Spain was built in his honor.  Construction began in 1075. For the last 1000 years, people from all over Europe have been walking to visit the tomb of St. James for various personal and religious reasons. The journey began at their home. Thus, there are many roads to Santiago.

I heard about the Camino de Santiago, a few years ago and put it on my bucket list of adventures. I then saw the movie, The Way, with Martin Sheen and Emilio Estevez. After watching this movie about a physician who walks the Camino, I was ready to book the trip. Another couple in our church had planned to do this walk and we decided to walk the Camino with them. Our adventure was becoming a reality. Later our friends decided to postpone their trip until the following year, so my wife and I began our walk on May 23th, 2019.

The most common question I have been asked about this journey has been, “Did you do the whole thing?” But there isn’t a whole thing. There are many trails starting from all over Europe, all ending in Santiago. Think of it like the spokes on a wheel with Santiago at the hub. We chose to walk the most popular trail, the Camino Frances. This Camino starts in France at the foot of the Pyrenees Mountains in the town of Saint-John-Pied-de-Port. It is 500 miles to Santiago from this starting point.

That traditional starting town is a bit hard to get to, so we started in Pamplona, Spain, which is famous for the running of the bulls. We picked this starting point, 450 miles from Santiago, because it is close to the traditional start and we could fly directly to it. It is a much more convenient place to start. Since every Camino is personal, you can start wherever you want.

When we arrived in Pamplona, we stayed in a nice hotel for two nights and explored the city. Then on May 23th, we woke up, put on our backpacks and started the journey.

We trained for about a year to get our walking legs and joints into shape. When we first started training, I could only walk a mile before my knees and hips started hurting. Before we started walking our exercise of choice had been biking, which doesn’t put any gravitational stress on our joints. We slowly increased our distance until our regular training walk was six miles, which we did three or four times a week, without any joint pain.

We learned that it is a different matter to walk long days back to back, so when we thought we were ready, we did a test run. After parking our car at my folks’ house in Medford, we walked sixteen miles with our backpacks to the small town of Ashland, Oregon. We then checked into a hotel, showered, went out for dinner and a play, then returned to our hotel exhausted. The next day we woke up, put on our packs, and walked the sixteen miles back to our starting point. When we finished, we were both really tired and my feet and ankles were killing me. My mom asked me if the test convinced me not to do this crazy thing. I told her, “No. This test convinced me that I can do it.”

The path travels from village to village across northern Spain. There are a few big cities in the path as well. These little villages are spaced anywhere from two to ten miles apart. Most of the time we walked less than six miles to the next town.

Most pilgrims stay in albergues, which are like hostels with bunk beds in a large communal room costing about 10 Euros a night. Dinner is another 10 Euros per pilgrim. Some albergues have a few private rooms with private baths for an additional price. Since money was not a concern for us, we choose to stay in the private rooms. Sometimes they were pensions or hotels instead of albergues, but the rooms were similar. We really enjoyed the privacy. The private rooms cost between 33 and 75 Euros instead of the 20 Euros we would have paid for two beds in a room full of bunk beds. Not listening to the communal snoring and not getting awakened before we were ready to get up were great advantages. Only one day did we use a communal room when there was not a private room available.

Not camping out makes the backpack a lot lighter. We also did not need to carry food. We purchased food in the villages along the way. The only place to eat in most of the villages was the local bar. The bars on the Camino are like a café in America that also sells alcohol. They cater to the pilgrims on the Camino.

We decided to walk fewer miles in the beginning of our journey and increase our mileage as we progressed. We averaged 10.1 miles a day the first week. During the third week our daily average was 15.5 miles. We took four rest days, each about a week apart. Overall, we walked an average of 13.2 miles a day. Our shortest day being 4.9 miles and our longest day 19.9 miles.

The first week was very hard. My legs, ankles and feet were very tired and sore by the end of the day. Most of the afternoon and evenings was spent laying on the bed resting my legs and feet. By the end of the trip, we could walk 15 miles, shower, and tour the town without difficulty.  We were in such good walking shape by the end of the journey that I wished we were starting at that point. But I was also pretty worn out and ready for a few days off.

We spent two days in Santiago and then took a tour bus to the coast about 60 miles away. After two days resting at the beach, our Camino Journey was over.

During the trip we kept our phones on airplane mode and only connected to WIFI in bars during breaks and at the albergue at the end of the day when they had WIFI. For the 38 day journey, we did not watch television or make phone calls. I did not write any books or blogs. We did take a lot of pictures.

It was a real luxury to be able to unplug from the hectic life I lead. Slow down and see the countryside as it changed from mountains, to mesa, to mountains again. Walk through vineyards, wheat fields, pastures, forests and small villages. See every little village and its beautiful, very old, church with a bell tower. It was a very simple life. The biggest decision I made each day was, do I wear the blue outfit or the green one, since I only had two.

After we returned to civilization as we know it, there were some things I noticed. The first time we traveled by car felt strange. I couldn’t remember how to use my computer. What was that password and where was that file saved? I loved being able to make change with coins I recognized. I missed fresh squeezed orange juice, which is everywhere in Spain. I was initially paralyzed staring into my closet trying to decide what to wear. Standing in line at the airport comparing the carts full of luggage the other travelers were checking and realizing all we needed for the last six weeks fit in a small backpack.

It was a great experience to walk the Camino. Removing all the stress and business of our everyday life is eye opening. Learning how little we really need to get by. I expect we will do it again and walk one of the other paths next time. Many people who walk the Camino, come back for more.

This is the kind of thing that reaching financial independence was all about. Having time to take off and experience life. This journey would have been hard to do as a practicing physician who rarely can take that much time off all at once. Having enough money to travel without regard to the cost, although this journey was very inexpensive, was very satisfying.

I also realized that you don’t need to wait until you retire to do these things. You can walk a shorter Camino route, or start your journey closer to Santiago. Half of all the people who do the Camino start in Sarria, Spain and walk only the last 73 miles, which is easy to do in a week.

One more thing has now been removed from my bucket list. How about you? When is it time to move items from your bucket list to your calendar? Now is the time. Every year choose one thing to do on your list. Put it on the calendar and begin planning. I attended the funeral of a friend last week and realized he was younger than me. Time is shorter than you imagine. Don’t leave this earth with a full bucket list. Go out and live your life to its fullest now.

23 thoughts on “My Camino de Santiago Journey, a FIRE Adventure”