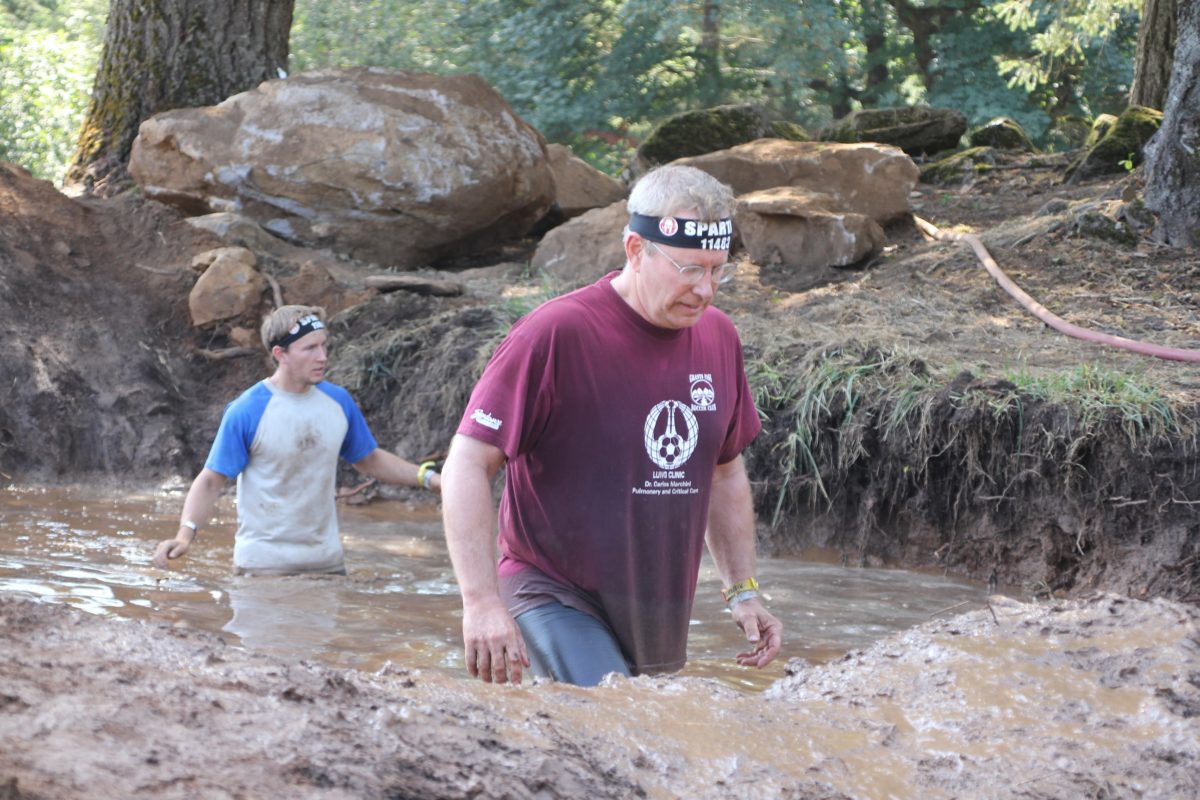 Keith and I, Spartans.

While my wife and I were on a recent vacation to Big Bear Lake in California, we rented the movie “Saving Mr. Banks.” It is about Walt Disney’s struggle to make the movie “Mary Poppins.” For the first time, I realized that movie was all about saving the father, Mr. Banks, not about Mary Poppins and her antics. We then went back and watched “Mary Poppins” with that in mind and got a whole new take away from the movie.

I saw so many doctors’ families in that story. The father is at work all day, and when he comes home he has no time for his kids. The mother is also never home, but in this case, it is not because she has a job. So they hire a nanny to raise the children, a maid to clean the house and a cook to prepare all the food. Makes you wonder, why they had kids.

Mary Poppins comes, not to take care of the children, but to teach the family what it means to be a family and have fun together. In the end, it takes Mr. Banks getting fired from his job to wake him up to the need for him to be present with his family. We shouldn’t need to have something drastic happen for us to realize our family needs us for more than just our income.

I see this played out in so many families. The desire to meet some arbitrary lifestyle leads us to the conclusion we have to work extra hard to bring in even more income. We borrow money to buy things we don’t need. Then we claim our spouse needs to work to keep up with the bills. They are then not available to run the household. So then other people are hired to run the house which costs even more money and the cycle continues.

Lifestyle creep is what happens and before you know it, snap, you can’t even make it on your two incomes. It is a rare case for someone with a high paying job like a physician, dentist or other professionals to need an income from their spouse. Most two income households in America do not earn as much as a physician. Yet the physician is not content with their high income.

I hear constantly how the cost of living is the problem. But is it really? An Average house in 1950 was 1,000 square feet. By 2013 it had grown to 2,598 square feet. It is not that the cost of housing has shot up, although inflation has worked some magic here, the house we desire has changed. We have more than doubled the size of our houses as well as increased the number of amenities like garages and pools. That is our choice, not inflation.

We have migrated from one TV to one TV in every room, one phone in the house to one phone in every pocket. We need a gym membership, a boat, annual ski pass, country club membership and so much more. It is not inflation that is the problem, it is our desire to always have more.

I remember hearing a conversation from a missionary returning from the bush country in Africa. He was asked what he felt the greatest problem was for the poor, starving people of Africa. He stated it was materialism. The questioner was confused, because with so little, how could those bush people be having a problem with materialism. The missionary stated, “If you have a dirt floor, you want wood, if you have a wood floor you want concrete. If you have one cow, you want two, if you have two cows, you want three. Whatever the people had, they wanted more. Whenever they saw someone else with more than them, they wanted it as well.”

Nothing downgrades the boat you bought two years ago more than a new boat in your neighbor’s driveway. We have a desire to keep up with the Dr. Joneses. This desire is causing great problems in doctor households across the country. We need to borrow to keep up and the debt and interest is killing us. Many doctors have a negative net worth but want to live the lifestyle of a millionaire. We need our spouse to work to pay the bills that we voluntarily created, and then we complain that we don’t have enough time to spend together as a family. I chose my house size and cost, I chose my automobile, and I choose to go on an expensive vacation. The cost of my lifestyle is my choice more than it is inflation.

Mary Poppins had the right idea, she would stay until the wind changed. After Mr. Banks got fired, he realized what was really important. He went back home and fixed his kid’s kite and took them out to fly it for the day. The kids had stated at the beginning of the movie that their kite was not very good and that’s why it broke. But if dad could help them build it, it would be a good kite and not break. The wind changed and Mr. Banks had time and the desire to mend that kite and take his kids out for an adventure.

This weekend I raced in a Spartan race with my son and sister-in-law. Not because I’m a Spartan, but because my son asked if I would do it with him. We raced through the mud and over many obstacles. My greatest nemesis was crawling on a washboard of mud under the barbed wire for 100 yards. In the end, we were tired (at least I was) and muddy, but we finished with some cuts and bruises, but no broken bones. My son asked if I would do it again next year and of course I said yes.

What’s your kite? What’s keeping you from going out with your family and flying it this week? What would your spouse, son or daughter like to do with you? What have they been asking that you have been turning down? If debt is holding you back, get my book “The Doctors Guide to Eliminating Debt” and remove that burden from your life. I challenge you all to think about what is truly important in your life and put some extra time there. Let’s go fly a kite!