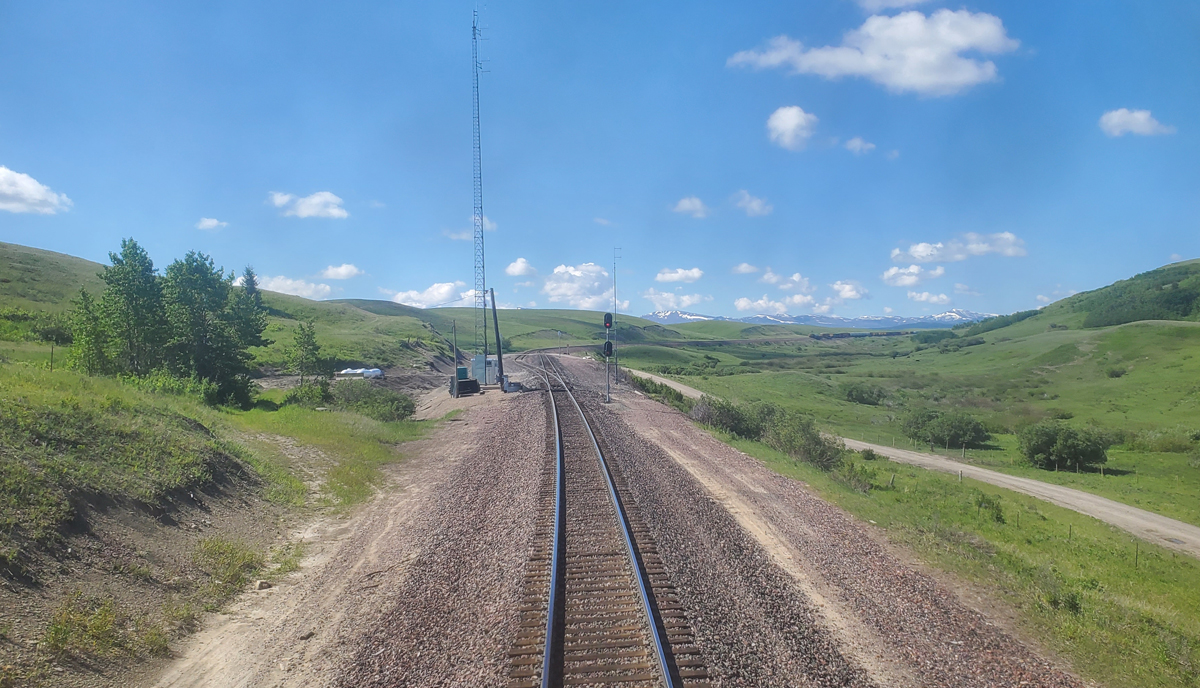 (Don’t forget to get your tickets to the PIMD Real Estate Conference coming in late September. I hope to meet many of you in person and in the mastermind groups at the event. You can also stay home and enjoy the conference virtually.)

Several years ago, while my wife and I were traveling in Europe, we rode on the high-speed trains. We enjoyed it so much that we wanted to experience riding the trains in the United States. We finally got around to doing it this summer and booked a six-week adventure exploring Lake Michigan with four back to back timeshare trades. The start and end of this trip comprised of riding across the country on an Amtrak train in a first class sleeper car. We chose to ride a different route each direction for a change of scenery.

The outbound trip was from Portland, Oregon to Chicago, Illinois across northern Montana on the Empire Builder train route. Riding the train through the Columbia River Gorge was beautiful. Although I have been through this area by boat, car, and motorhome, the train offered a great view without the distraction of driving a vehicle.

We left the gorge around sunset and woke up the next morning in the Rocky Mountains of Western Montana at Glacier National Park. The view was spectacular and we spent that day crossing the plains of Northern Montana following the original Lewis and Clark route much of the time. I suspect this rolling prairie looks a lot like Lewis and Clark experienced except there were likely a lot of bison on it back then. The sun set some time after entering North Dakota. We awoke in Wisconsin and passed through a lot of farmland, arriving in Chicago that afternoon; almost 48 hours after boarding the train.

After vacationing 4.5 weeks around Lake Michigan we boarded the train in Chicago for our return trip home through the Colorado Rockies on the California Zephyr. We crossed the farmland of Illinois and Iowa in the daylight and woke the next morning in Denver. We then spent the day going up and over the Rocky Mountains on what is said to be the prettiest train ride in the United States. I think they are right. Just before we reached Winter Park we entered the Moffat Tunnel that was 6.2 miles long and took us 10 minutes to go though. This tunnel was opened in 1928 and was the longest tunnel in the country. It is at 9,200 feet elevation and 2,800 feet below the continental divide. That tunnel saved a lot of travel miles.

The sun set before we got to Salt Lake City and we slept though the deserts of Utah and Nevada awakening near Reno, Nevada. We then enjoyed traversing the Sierra mountain range which was nearly as beautiful as the Rockies and ended our ride in Sacramento, California where we caught the Coast Starlight train at midnight to travel back to Portland, Oregon. Waking up in Klamath Falls, Oregon the ride up to Portland took a different route than the roads we have frequently travel. It was nice to see our home state from a different perspective.

Since our travel route included 2 nights going and three nights coming back, we opted to purchase a room in the sleeper car. This is an expensive way to travel, but it’s much nicer than first class on an airplane. We spent $5,650 for our three train round trip sleeper room experience which included all meals while riding on the train.

A sleeper room has a chair, a couch that will seat four, a tiny sink, a small room that contains the toilet and by covering the toilet paper the room turns into a shower, and all the electricity and outlets that our electronics needed. The couch makes into a twin bed and another twin bed folds down from the ceiling. There was plenty of room for the two of us and we had a view out of both sides of the train. We were served three meals a day in the dining car at a nice table, like eating in a restaurant with a limited menu. If you pack two carryon size suitcases, they nicely stow out of the way in this cabin without the need to check a bag.

The passengers in coach had accommodations similar to a first-class airplane seat, with their luggage checked. Taking this round trip in coach would have cost the two of us about $900 and we would have slept five nights in a chair. The coach passengers could buy food at a café downstairs in the viewing car or they could bring their own. They did not have access to the dining car restaurant we used.

There was also the option of a mini-sleeper, which is two chairs facing each other next to the window. Those chairs make into a bed and another bed comes out of the ceiling. The community bathroom is at the end of the car with community showers downstairs.

Taking the train was the best travel arrangement I have ever experienced. After arriving at the train station, we walked directly to the lounge reserved for the sleeper car passengers, (no lines), and relaxed with our luggage until it was time to board our train. The lounge had free snacks, soft drinks and coffee, and a bar where you could purchase mixed drinks. The quality of the lounge varied greatly at each station.

When it was time to board the train, our train number was called and an attendant walked all sleeper car passengers from the lounge to the sleeper car. We then boarded with our bags about ten minutes before the train pulled out. No security to pass through, no lines, no fuss, no showing ID, no liquid container size restrictions, and no TSA guards. At the entrance to the car they simply asked us for our names and showed us to our cabin. We kept our luggage with us in the cabin so it couldn’t get lost. We did have the option to check our luggage into the baggage car if we desired or had lots of luggage. We tend to travel light.

During the ride we could each sit at the window in our room and watch the spectacular view. I spent many waking hours on the train enjoying the view, writing future blog articles, and reading a novel. I would write or read a paragraph and then check out the view alternatively. It was great to be able to get a lot of work done while we were making our way across the country. The ride was very relaxing and much more inspiring than writing in my office back home. It was like traveling in our motorhome without having to drive.

Sleeping was not a great experience, but sleeping in a bed was much better than sleeping in a chair in coach. With many train whistles at railroad crossings throughout the night (I used ear plugs) and the jiggly ride, I didn’t sleep well. It was plenty smooth, however, for sitting and reading. We did get some sleep and the beds were reasonably comfortable. Combining both trips, we slept five nights on the train; each night getting better sleep than the night before as we got used to noises and the motion.

The train had a nice observation car with giant windows on the top and sides. The views were great. Before we reached the Colorado Rockies, tickets were passed out so everyone who wanted to have a great view while traveling through the Rockies could have a turn in the observation car. The Rockies really were as beautiful as advertised.

Train food in the dining car was not five-star restaurant quality but it was pretty good. Imagine eating at Denny’s on wheels. Each of our three trains had the same menu. For dinner we had a choice of three appetizers, five main courses and three desserts. The desserts were the best part. The steak was the best entrée, making for an excellent meal.

Exiting the train was very simple. When the train stopped at our station, we grabbed our luggage and walked off the train and into the terminal and out to the taxi stand. There was no need to wait for luggage at a turnstile, which is what those who checked their luggage did.

One amenity I wish had been on the train is an exercise car. I love the exercise room on cruise ships that look to the front of the ship, enabling you to watch the sea as you ride a bike or walk on the treadmill. That would have been a nice change of pace to being confined to a room for 48 hours with only a wobbly short walk up and down the aisles for meals.

During the summer when the tracks get hot, the train must travel at a slower speed in order to stay on the tracks, according to the attendant. So, our train was behind schedule most of the trip, even though we were able to make up a little time at night while the temperature was cooler. Trains leave the first station on time but get further and further behind as the trip progresses. We arrived 1.5 hours behind schedule going to Chicago, four hours behind schedule traveling from Chicago to Sacramento, California, and thirty minutes behind on our last leg up to Portland, Oregon. Fortunately, our layover for our connection in Sacramento was ten hours.

Following is a cost comparisons for the different travel options on both a train and an airplane for a round trip from Portland to Chicago for two people (not per person) four months in advance.

Explore America Coach Rail Pass (10 segments going anywhere in the US in 30 days): $998

Overall, we had a great train trip that we look forward to doing again. Traveling by train is a very relaxing way to cross the country, especially when you don’t need to switch trains along the way. It was one of the most relaxing journeys we have taken. Taking a train is especially good for retired people who have the time to travel at a slower pace and enjoy the journey along the way. The train also has less hassle than an airplane, but it costs more.

A special note when using the shower, which is very small. Plan to start your shower as the train comes into a town. The train slows coming into town, stops for a little while, and then slowly speeds back up again goes out of town. This makes the shower a lot less wobbly.

-Can arrive at the train station 15 minutes before departure.

-No security to get through.

-No limits on the size of liquid containers.

-Sleepers can carry their luggage so it can’t get lost.

-Travel time is longer for long distances, for shorter distances the train arrives at a similar time as taking a car.

-Much better view along the way.

-Sleepers get three good meals a day in the dining car. Coach has a café to purchase food.

-Can get up at any time and walk around.

-Don’t need to bring as much to occupy your time as you have changing scenery to watch, you can take a walk from one car to the next, and you can visit with other passengers while dining or at the observation deck.

-Consider motion sickness pills if movement is a problem for you.

-You don’t need to put your phone on airplane mode, but service comes and goes.

-Can take on as many bags and carry-ons as you want without extra charges.

If you haven’t traveled by train add it to your bucket list, it’s a great experience.

Have you ever crossed the country on a train? Tell us about your experience.

1 thought on “Riding an Amtrak Train across the US”