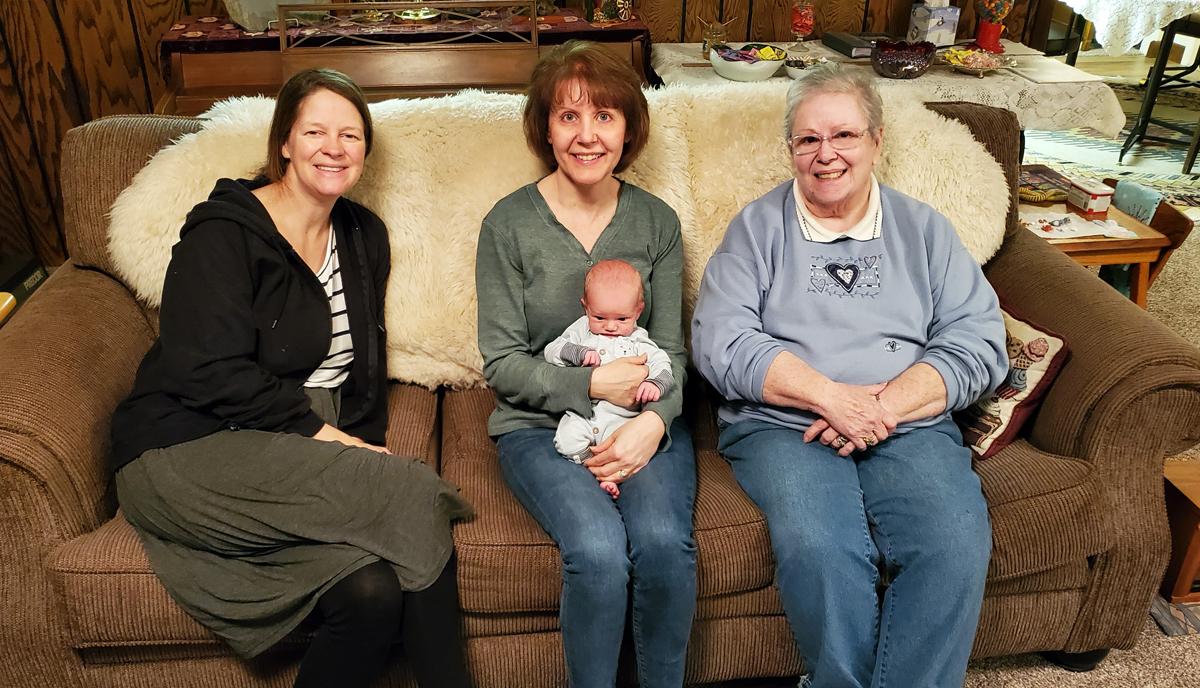 I want to wish all you mothers an early Happy Mother’s Day. We welcomed our first grandson into the world a few months ago and I have been reflecting on both the effect he has had on our family, and the effect our family will have on him. Every woman’s face just lights up when they see him. It was like getting a shot of happiness that has spread throughout our family.

But I realized that our family is not like every other family. My grandson’s mother, grandmother (my wife), and his two great-grandmothers (my mother and my wife’s mother) don’t live under constant financial strain. The oldest three families are retired and comfortable financially. The young new mother is not living in a household that squeaks by paycheck to paycheck. As I’m watching this unfold, I see the importance of having good financial footing, living within your means and avoiding debt, before becoming a mother. Financial stability has an incredible effect on motherhood.

I did not grow up in a wealthy family, but we didn’t lack anything we needed either. My parents both worked to make enough income that my mother had a sufficient amount of money to meet her basic financial needs, and in turn she was freer to meet her children’s needs. She chose to have a job where she could come to all my school events, even if it meant taking time off work and missing out on some income. Because my parents lived within their means and avoided debt, they were not so chained to earning a living that they couldn’t take unpaid time off from work to support their kids in their extra-curricular endeavors.

I remember my mom being on the sidelines for my games, both home and away, which was not a luxury available to all my teammates. Many of my teammates’ families earned a lot more money than mine did. But where were their moms? They could not afford to take time off work. They had bills to pay, debts to service, and not enough cushion in their budget to take a few hours off work to come see their child’s game. Or they chose to work in jobs that would not allow them to take the time off. Yet, even with taking time off to support their kids, my parents retired in their 50s.

Then I watched my wife when she became a mother. Since we lived on only half of our income from the day we got married during my internship, she had a lot of leeway for what to do when we had our first child during my residency. She could take her full three months unpaid maternity leave because we didn’t need her paycheck to pay the bills. Had we been barely making it on our two incomes, also known as not living within our means, she could not have had such a long unpaid leave. She feels blessed to have had the opportunity to spend the first three months at home bonding with her first child. Financial security makes a difference.

After we left residency, and moved to Oregon for my attending job, she did not seek a new job. Knowing that we had a financial cushion, she had the luxury of choosing what she felt would be best for herself and the kids. She could work if she wanted and have a daycare person help raise and teach our kids, or she could stay home and do that job herself. She loved having the option. She chose to stay home with our son and the son on the way. She never did go back to a paying job.

It is not that she never worked outside the home, she just never got paid to work. She used her accounting skills and other talents as a volunteer at the church, school, my medical practice, and other businesses. She contributed to our real estate investing as the bookkeeper, receptionist and showed apartments when I wasn’t available. Even without her working, we still reached retirement in our 50s.

Because we are now retired and financially independent, we are available to care for our grandson, while his parents work, giving them more options. We currently have him 1 ½ days a week. It is truly a joy to take care of him and help raise him with love and great family values. We are glad our financial independence has given us this option.

Now I see my daughter-in-law as a new mother. Our son and his wife are not yet financially independent, but they do live well below their means and have passive income from real estate supporting their budget. Their financial security gave her the chance to take a full maternity leave and return to work only half-time. Since they did not live paycheck to paycheck, she had a choice of whether to return to her full-time job or not. She chose to continue working, but just 20 hours a week. She was very happy to have the option. Financial security makes a difference.

She is overjoyed that her son has two grandmothers, including her mother who is also retired, who can split the 2.5 days of childcare she needs in order to work half-time. It is a bonus for their child to become closer to both sets of grandparents.

I did not know my wife’s mother during her mothering years with young kids, but their family also lived well within their means and avoided debt, thus giving her more options as a young mother. Her choice, like my wife’s, was to not return to work after having kids. They also retired in their 50s.

I wonder how things would have played out in our family if each generation had the habit of outspending their income and living paycheck to paycheck. If each thought it was OK to whip out their credit card and buy things they didn’t have the money for. If each generation had perpetual mortgages, car payments, appliance payments and credit card payments to make. What would have happened if financial stability were not the norm in our family?

The reality is all four of them, mother, grandmother and both great-grandmothers, own a house, are debt free (including the mortgage) and have financial stability. They don’t worry about having the money to pay the bills. They don’t worry about losing their home if they lost their job. With money worries mostly absent from their lives, they devoted more energy to raising their family. This was not because they all had high paying jobs. This resulted from them having the disciple to live on less than they made and avoid debt at every income level. Two of these mothers had jobs while raising their children and two chose to be stay at home moms.

A recent article from CNBC tells us that 9.8 Million Working Mothers in the US are Suffering from Burnout. It is interesting that when the article talked about ways to help avoid burnout, improving their family’s financial situation by spending less and avoiding debt was not on the list. I think that was a missed opportunity to remind mothers of the importance of financial security. What would have been different in our lives if any of the three generations of mothers in this chain had suffered from burnout? How would it have affected their children and their marriages, which have lasted 60, 60, 32, and 3 years and counting?

There are so many positive aspects to the pursuit of financial independence. The journey of life is much more pleasent when money stress is removed by living well below our income, avoiding debt, and saving for the future. The retirement years are much more fun when we can retire in our 50s and have enough money and energy to do fun things. And child raising options are much greater when you can choose to work or not as you feel drawn.

Do yourself and your family a favor and set a goal to become financially independent, so you will be financially secure all along your life’s journey. When seeking financial independence, you tend to be financially secure and have more breathing room and options throughout your life. Spend less than you make, save money for your future, and avoid debt. If you do these things, you can have an impact that will last for generations to come. If you need help reaching this goal, contact me to get into my financial makeover program and I will help put you on the road to financial independence to expand your mothering options so you can become the best mother possible.