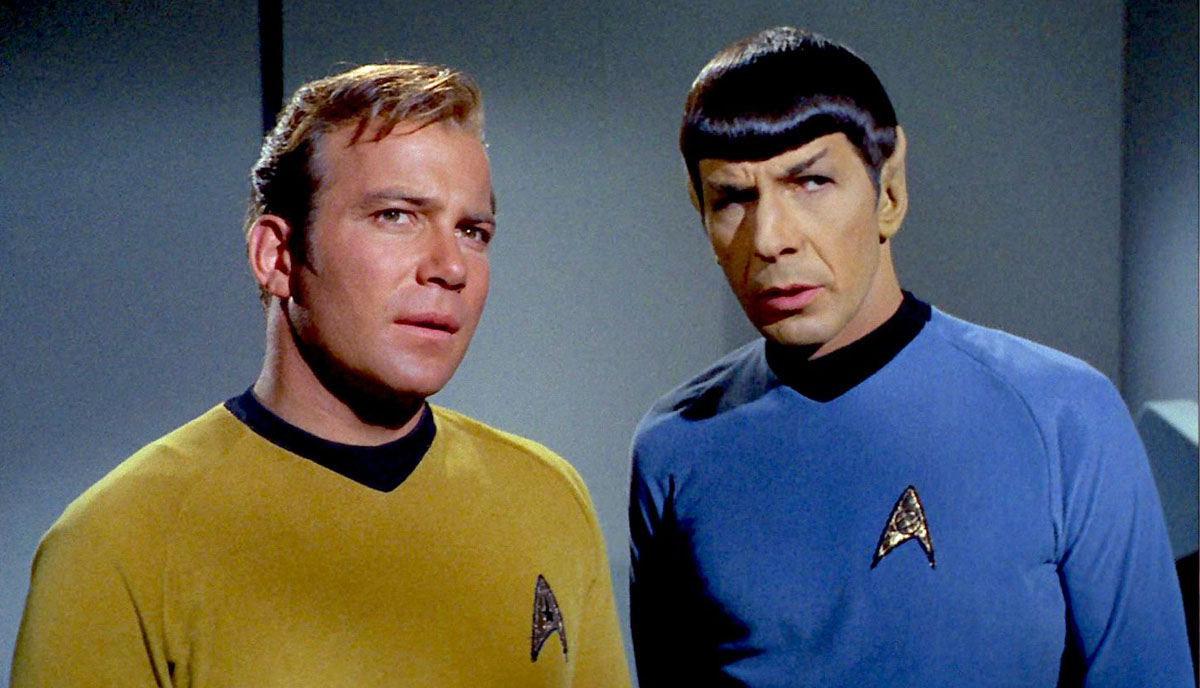 I was thinking about this question recently and saw a Star Trek movie advertised on television. Spock is such a logical person that everything he does is based on logic. So I thought, what would Spock say if Captain James T. Kirk had posed the question to him about paying off debt vs. investing? Here is how I envisioned the scene would play out.

I picture Captain Kirk and Spock sitting in the officer’s lounge talking over a glass of Romulan ale, after it was made legal of course. They were letting their guard down and relaxing as the USS Enterprise was not near any enemy vessels. While Jim was chatting about things back home on earth he asked,

“I’ve been thinking of paying off my house with my next bonus. But I’m a little concerned about the opportunity cost I might give up since the loan’s interest rate is only 4%. What do you think Spock? Should I pay off the loan or should I invest the money in an intergalactic stock market index fund?”

Spock would then look at Jim and his right eyebrow would go up as he got a puzzled look on his face.

“Your question is highly illogical, Jim.”

“What do you mean Spock? This question is asked all the time?”

“The frequency of a question’s utterance, does not improve its logic.”

“How do you see this as an illogical question, Spock? If I am paying 4% interest on the loan, I will only get a 4% return by paying off the loan. But the intergalactic stock market has been returning 8%. Won’t I do better if I invest the money at 8% than if I pay down the loan at 4%?”

“Captain, your analysis of the situation is flawless. However, the logic by which you arrived at your conclusion escapes me.”

But what you propose, Jim, is not math. Your 4% figure is indeed a fixed number. But your 8% return of the intergalactic stock market is only a past average. That is not a fixed number. You do not know what you will get if you invest in the stock market. You may get 8%, but you may also lose 20%. Since the number is not constant, it cannot be compared with the 4% in a math equation. You cannot compare a real future return with an imagined future return.”

“But Spock, I’m sure that over the long run, I will get 8% return on the investment.”

“Jim, you cannot be sure of anything in the future. Speculating is illogical. In critical moments, men sometimes see exactly what they wish to see. You wish to see a good return on the investment, so that is what you project. I suspect you are wanting to keep the money in your possession so you are projecting and proposing, illogically, that the investment will certainly be better for you than letting the money go by paying off your debt.”

“So, Spock, you are telling me all those investment advisors that want me to invest with them instead of paying off my debt are wrong?”

“Captain, many myths are based on truth. You do realize that your financial advisor will make money if you invest with him, but will not make any money if you pay off your debt. Can you not see the bias in his recommendation? Can you not see he has a strong need to get you to choose the option of investment over debt repayment?”

“I’m sorry to hear you say that, Spock. I’ve already sent word to my broker to invest the money when the bonus comes in. I was hoping you would agree that it was the right decision.”

“Has it occurred to you that there is a certain inefficiency in constantly questioning me on things you’ve already made up your mind about?”

“Yes, that has occurred to me. But it does make me feel better when you agree with the decision.”

“I don’t know, Spock, I really hate to pay off low interest loans. It just feels like someone has given me free money.”

“Captain, free money does not come with a price tag of 4% interest. Free money is a gift, not a loan.”

“Well, I guess you are right, if we were to think about this logically. But when were Humans ever known for that?”

“Indeed captain. Whatever you decide, and whatever happens, I have been and always shall be your friend.”

Then the lights flash and a siren sounds signaling a red alert, causing both Spock and Captain Kirk to put down their Romulan ale and run to the bridge.

How do you feel about how the scene played out? Is it worth borrowing at 4% fixed interest to invest in a maybe 8% return? Would you take out a loan against your house to buy a hot stock? Is it worth risking your house? If it is not worth the risk, maybe the logical thing to do is pay off the debt and go for the sure thing. It’s what I chose and you can read all about my thought process in The Doctors Guide to Eliminating Debt. It’s the logical thing to do.

5 thoughts on “Intergalactic Investing with Spock”