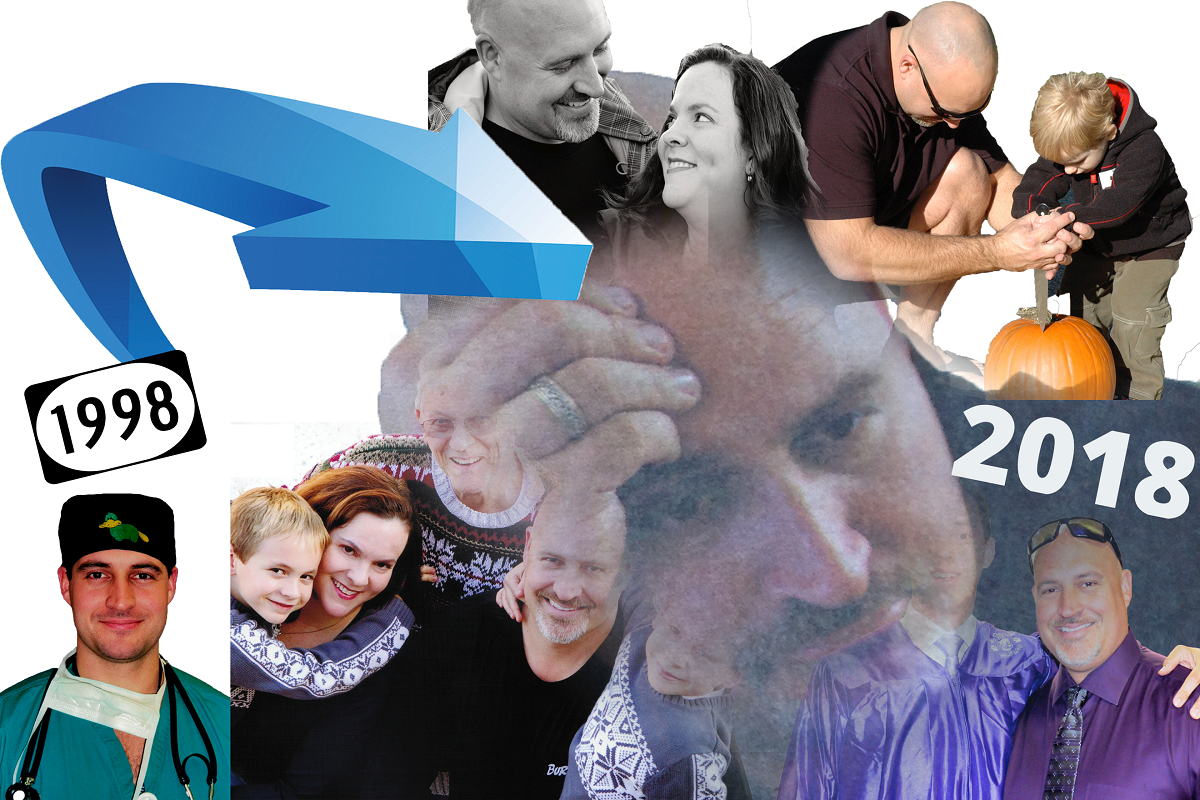 Today we have a guest post from Christopher Yerington, MD, writing his personal story about the loss of his clinical career, disability insurance and the near insanity of being a physician disability claimant. May you find his tale very insightful.

In my late thirties, my left medial nerve had done as much as it was going to do for me in this lifetime and ceased functioning properly, robbing me of the good use of my left thumb and index finger. This ended my clinical career as a cardiac and trauma anesthesiologist.

The tragedy experienced under my poorly written group disability policy from an uncaring behemoth of a company is a warning that other physicians should heed. Physicians must have private individual disability insurance from one of the best companies, or their financial lives might just end in misery if they become disabled.

In 1998, as an Intern, I purchased Individual Disability Insurance. Leaving the academic world in 2006, I entered private practice, picking up a group disability policy as well. During 2009, I began to get weaker. First, I noticed it in the gym, when lifting objects above my head, then it began to make procedures and intubation more difficult. I figured I was getting older, working too much and sleeping less than I should, since I was also attending law school at night.

An orthopedic surgeon noticed me lift an irrigation bag to the top of an IV pole one day in September of 2009. He asked to examine my left shoulder. Not exactly sure of what the issue was, he ordered an MRI.

The MRI showed joint problems, lots of them. I had been a competitive swimmer, a martial artist and lifted weights regularly for years. It was time to pay the price for my athletics. Surgery happened a few weeks after the MRI. Everything went as expected, initially. Some atrophy is predictable during the surgical recovery, but the atrophy in my lower left forearm and hand was beyond anything I had ever seen in post-operative patients. The orthopedic surgeon and I were concerned, and neurology was consulted.

The Neurologist repeated my exam six times and used two different machines. He looked up at me. I knew, he knew. Silence. I finally said, “I will never practice clinical anesthesiology again.” The EMG showed chronic permanent damage of my left median nerve. Full neurological exams and multiple EMG’s eventually showed deficits in the left lower leg and foot as well. I was told that I might need the use of a wheelchair later in life. The chronic nerve damage was thought to be the result of the neck and brachial plexus injury I sustained during my high forceps delivery 40 years earlier.

My last day of clinical practice was October 15, 2009. I went on disability in January 2010. My Group Disability Insurance Carrier had changed on October 1, 2009. It happens from time to time that one insurance carrier will sell an entire book of business to another carrier. In my group carrier’s haste to prepare documents, there were sections in my group policy that were, well, incomplete. My “Own Occupation Period” section was literally written, exactly like this, “USE CUSTOM WORDING.”

There were other more minor issues with the group policy contract, but without a definition for an own occupation period, it made the entire contract nearly impossible to interpret as every other section referred to this definition. Lawyers got involved. It boiled down to this, in order to receive my benefit from my group carrier with certainty, I could not finish law school and obtain another professional degree. Also, unfortunately, I could not earn even $1 without the possibility of losing the benefits.

I had just lost 43% of my income. My wife had to change jobs to keep health insurance for someone with a ‘progressive degenerative peripheral nephropathy’ and to give her flexibility to take time off work if my condition worsened. That caused her to lose 25% of her previous income as well. Now I was facing the choice of attempting to reboot my life and build a second career knowing that I could again lose another half my family’s benefit income, or I could just stop… stop everything and do nothing and collect the checks that provided for my family. I love my family, so I chose them over me.

I would learn in those next months that my group disability policy has written provisions defining ‘work’ or ‘employment’ in terms so loose they refer to ‘any job performed by any person anywhere that is paid.’ That meant I was on shaky ground even volunteering for the PTO at my kid’s school because there are school districts in America where PTO members get paid… hence, my group contract may consider that ‘work.’ Sounds totally ridiculous, right?

For my private practice colleagues, the group carrier ‘fixed’ the contract the following anniversary year on October 1, 2010. Yet, since I was a claimant, my ‘2009’ policy was set in stone from the date of my disability. I attempted to work with the carrier’s claims specialists… I’ve had seven, but anytime they mistakenly told me anything the insurance company didn’t like, they were removed from my case.

I continued to try to work with them, even fight with them. I just wanted an answer. My life was frozen, no forward motion was available because I could not increase my family’s income. One time I got to speak to a ‘senior claims specialist’ at the group carrier, and she promptly, by inadvertently copying me on an email, ‘teased’ me with, “maybe a settlement would be better for this guy.” She then redacted the message. Cruel or unimaginably incompetent, I cannot decide.

Knowing each day I was trapped doing nothing I felt was meaningful or purposeful or economically gainful in this world, was an unacceptable and unbearable burden. After being a physician, this was misery. I still attempted to be a great dad and husband, but the energy needed began to fade from my life. Was I having suicidal ideation? I am still not sure. I spent 30 days in intensive inpatient-outpatient therapy and another year in weekly groups and therapy… mostly trying to learn to live in my jail of a life.

My group carrier decided to not pay my next benefit check. When I finally was allowed to speak with someone, they said, ‘oops,’ it was a clerical error. I admit, I did not keep my cool on the rest of this phone call, but it ended with my claims specialist stating that, “you send us everything, it is too much to read. It would really be easier for us, Mr. Yerington, if you had died.”

I was convinced to sue my disability carrier in order to get the information on what would happen to my group benefit should I earn $1, or even $500 every month, so that I could make a plan for my life. My carrier refused to answer these questions stating they do not have to by law. After an 18-month process in Federal Court, under ERISA Law it turns out they are correct: legally they do not have to tell me anything. How’s that for closure?

In all that turmoil and personal horror, I eventually saw what I could do and then, what I wanted to do. You see, I’ve always been a teacher. I’ve never stopped teaching anyone who would listen about almost any subject since I was 10 years-old teaching swimming lessons at our community pool. Turns out that the one thing I now know a tremendous amount about is being a physician claimant on disability. I also know a bunch about general disability insurance, how a physician should protect their income, and how a physician can survive an amazing financial insult by understanding basic financial literacy.

When I first went on disability; I told my colleagues what happened… many of them then bought better disability insurance and increased their savings rates. I used my knowledge of business and law to help community start-ups and friends build businesses. I’ve watched some of them make good money, too.

After having major insurance carriers that sell disability insurance to physicians approached me,  I got my insurance license and started my own company to teach physicians about insurance! I educate them on disability insurance, proper income protection, basic financial literacy, and advocate for them as claimants so they will not feel alone. These actions may result in generating income and will start another two-year legal battle with my group carrier which will likely cost my family hundreds of thousands of dollars in legal fees before it is ended.

That’s what has gone wrong. What went right? Well, I maintained 57% of my previous income. My wife and I had saved 20% of everything as well as maximizing our retirement contributions. We saved for our kids’ college. We were able to stay in our home, in our community, and live our lives. That is what disability insurance is supposed to be for and what I feel empowered to teach with compassion and experience to other doctors.

Dr. Christopher Yerington retired from clinical anesthesiology due to his own disability in 2010. Because his disability policy did not cover him like he thought it would, he now spends his time educating medical groups and residency programs about the importance of great disability coverage. He resides in Columbus, Ohio. We have no financial affiliation. You can contact him through one of the sites below:

If your career in medicine has come to an abrupt end, please read The Doctors Guide to Smart Career Alternatives and Retirement, it may help you find a new direction.

14 thoughts on “Insurance Struggles With My Career Ending Disability”