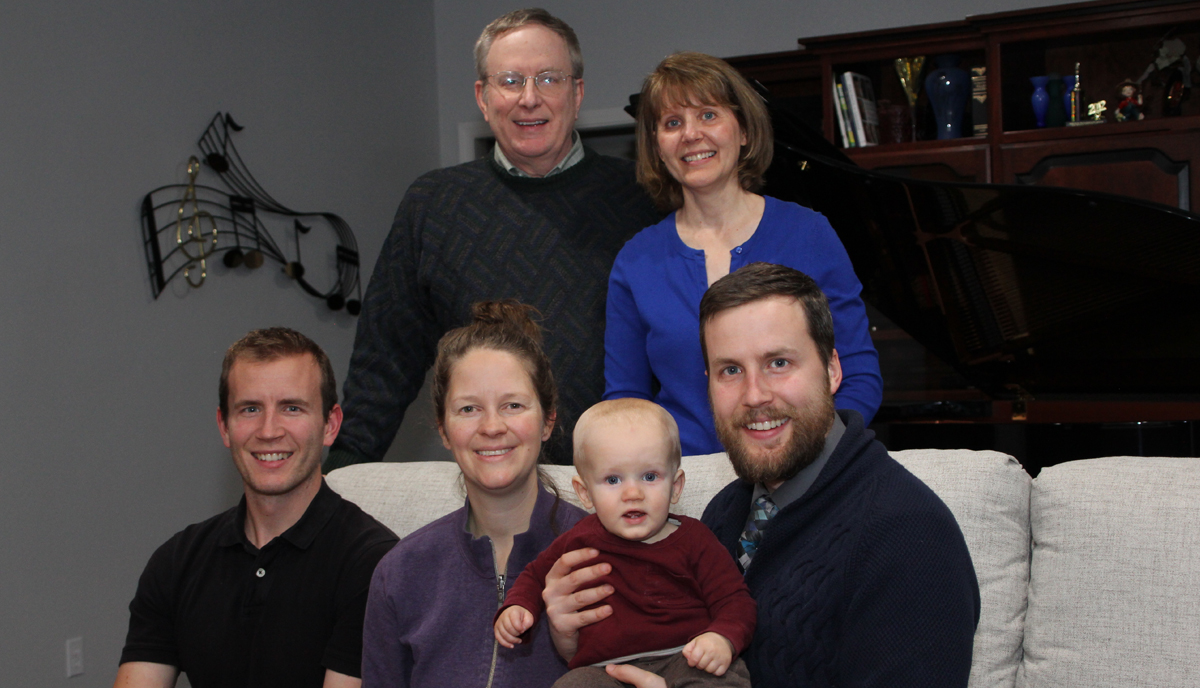 I was recently reminiscing about my first year as a new grandfather. My wife and I have a lot of fun spending time with our grandson two days a week while his parents are at work. He is a joy to play with and he is learning new things daily.

One day while our grandson was with us, I started thinking about the great benefit it is to have grandparents close by. When our first child was born, we lived twelve hours from his nearest grandparent. We had no family nearby. I was in my fourth year of surgical residency and my wife worked for a large carrot packing company. We required childcare since we both worked the same hours.

When my residency was finished, we made a conscious decision to begin my life as a surgeon in a town situated between our parents, who lived a four hour drive apart. Our kids were going to grow up knowing their grandparents.

My son made the same choice, so my grandson has both sets of grandparents living in the same town as well as all of his aunts and uncles. We are retired and his other grandmother is retired as well, but his other grandfather is still working. Consequently, our kids rarely need to pay for childcare. Almost always one of the grandparents, aunts or uncles are free to watch my grandson.

As I pondered the financial strain of childcare on dual income families, I began to wonder how much parents spend on childcare. Was having an available grandparent nearby really a big financial help? So I started doing some calculations and was astonished by the results.

In more than half the states, childcare costs more than the cost of tuition at a public college. Lately there has been an uproar about the cost of a college education and the government’s attempt to forgive student loan debt. But where is the uproar about the high cost of childcare for working parents? Students can get a loan to pay for college, but working parents can’t borrow the money for childcare. Parents have to earn it, pay taxes on it and pay the childcare providers with real cash money.

My grandchild lives in a state where the cost of childcare is near the average, but because of all the family living nearby, his parents rarely need to pay for childcare. I began to ponder what would happen if someone invested the money they would have paid for full time childcare.

When the grandchild started school there would be $90,070.04 in savings. If that money is then left to grow for 35 more years, until the parents retired, the account would have grown to a total of $1,482,280.55. That’s a big return for having a child spend their first five years hanging out with their grandparents while their parents were at work.

What if this family had three kids, each two years apart? By the time the parents retired, the second child’s childcare account would grows after they start school for 33 years which totals $1,263,787.02.  The third child’s account would grow for 31 more years totaling $1,077,500.24. Combining these three accounts would give the parents a total of $3,823,567.81 toward their retirement.

With a little help from the grandparents, the kids could easily become multi-millionaires!

There are also secondary benefits: Growing closer to your grandkids and instilling your values instead of the values of a non-family childcare provider.

Many children move a long way from their parents and are unable to take advantage of having their parents watch their kids. That was true for us when our first child was born as I didn’t have total control of where my residency was located.

Many grandparents are not retired and are therefore unable to watch the grandchildren while their children work. But they can still contribute as time allows, and every little bit helps.

We currently care for our grandson two days a week during the school year. Sometimes, however, we are out of town, so some childcare is needed when the other family members are not able to pick up the slack. Childcare is not our fulltime job, but we help when we are in town.

This is just another of the great advantages I’ve experienced from retiring early. My wife and I can help raise the grandchildren together. Had I still been working, my wife would have enjoyed caring for our grandson herself. It’s a lot more fun to do together.

In my book The Doctors Guide to Starting Your Practice/Career Right I discussed the importance of choosing the location of your job. One of the important factors is the proximity to your extended family. If you choose to live 2,000 miles from your parents, then not only will you miss out on the opportunity to avoid childcare costs and to have your children become close to their grandparents, but you also spend additional money traveling to meet them for holidays.

When I was growing up I lived close enough to ride my bike to the homes of all four of my grandparents and one great-grandmother. My brother and I loved spending the night with them, visiting for the day, going on activities, and so much more. Having a close relationship with your grandparents has many rewards.

When I sit at the piano and start to play, my grandson drops whatever he is doing and comes running to me. He wants to sit on my lap and play the piano with me. It is a wonderful feeling for them to want to be with you.

At a recent party at our home, my grandson was not feeling well and came to me to hold him and comfort him. Another grandfather in the room commented to me that he had never had that happen to him. He had been a grandfather longer than I had but had never held his grandchild in a comforting manner. In fact, he rarely sees his grandchildren. I could see in his eyes the longing for a closer relationship with his grandchildren.

Foster the grandparent/grandchild relationship. The grandparents will never be sorry for the time they spend with their grand kids and the parents will get a great economic boost with every day of childcare provided. It could be a multi-million dollar arrangement.