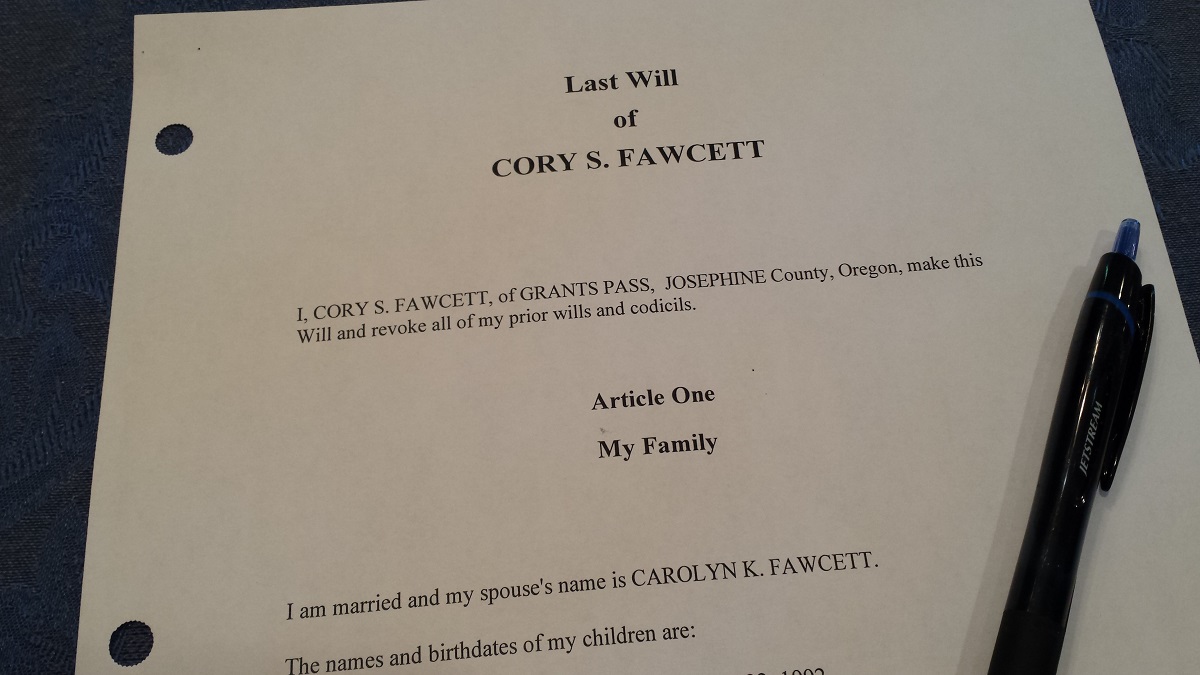 Today, as I write this, I sadly read about another celebrity with significant wealth who died without a will. Aretha Franklin left behind an estate worth $80 million with significant future royalties and no instructions for who should receive her fortune. Over the next few years, we will hear about the fighting and legal battles over her estate.

Abraham Lincoln died without a will.  Since he was an attorney he could have written it himself, yet he didn’t.

Picasso died without a will and it took six years and $30 million in attorney fees to settle the family disputes over his estate. If he knew that it would cost his family $30 million of his hard earned money to settle his estate, do you think he might have considered making a will?

Many famous people have died without writing a will, but what about our family and friends? How many are living without a will? According to a survey done in 2015 by Rocket Lawyer, nearly 2/3 of Americans don’t have a will. I can understand this for young people, who aren’t old enough to get married and don’t have assets that family members will fight over, but 54% of those age 55-64 (my age group) don’t have a will. 54%! This age group has about a 1% per year death rate. Ten out of every 100 people between age 55 and 64 will die in the next ten years, yet over half of them do not have a will.

So what’s the big deal about not having a will?

People who die without a will are said to be “Intestate.” This means the statutory laws of the state where the deceased resided will determine, based on an algorithm, how their property will be distributed upon death. This includes their assets, children and future income. Everything they own, except those assets that list a beneficiary, will be effected by not having a will. In Oregon, for example, everything will go to your spouse. But, if you have a child from a previous marriage, your current spouse will only get half of your estate. The other half will go to your children. State law may not distribute your property the way you wish it to be distributed. If you died tomorrow, what would happen if your spouse lost 50% of your estate?

Why should you have a will?

Why don’t Americans have a will?

I have heard many excuses as to why people don’t have a will.  Here are a few:

“I don’t know what to do with the kids.”

“I don’t have enough money to pay an attorney to write a will.”

“I don’t have enough of an estate to need a will.”

“I don’t have anyone to leave it to.”

“I don’t want to think about my death right now.”

“I don’t think it’s that important. After all, I won’t be here.”

“My spouse and I can’t agree on what to do.”

Some of the decisions needed in a will are difficult, and most people like to avoid difficulties. If you have several kids, you might not want to burden a friend or family member with their care. But do you really want the state to decide who will raise your kids? Is it fair to your children to just let them drift? You owe it to your kids to make these crucial decisions that will profoundly affect their future.

A basic will is fairly inexpensive and easy to write. A quick way to acquire a will is to write one online. All you have to do is fill in the blanks, print and sign. Check your state requirements regarding signing the will. Most require two witnesses that are not named in the will. This could all be completed today. You can also make an appointment with an attorney to draw up a more thorough will. Unless you need a trust, it shouldn’t cost very much to take this load off your back.

What problems will occur without a will?

If you die without a will, you will incur no problems, you’ll be dead. The problems will fall on the shoulders of those you leave behind. I suspect that is the real reason people don’t have a will; there is no personal pain associated with not having one, but there is personal pain associated with making the decisions and the cost of acquiring a will. We all want to avoid pain, so this task gets postponed.

Without a will, families fight about what they think you would want done with your belongings. I watched one family fight over the inheritance from their grandmother. She died having outlived her two children. One of her sons had two kids and the other had four kids. Her grandchildren argued about how much of the inheritance each grandchild should get.

On the other hand if you just counted all the grandchildren the same, they would each get 16.6% of the estate. The difference between getting 16.6% vs. 25% of an estate can cause, and did cause, great strife. Do you really want your descendants arguing over your money?

Another issue of dying without a will is time. It can take a long time for the state to settle an estate. Sometimes the fighting between family members can go on for years. If your spouse or children are depending on the assets in your estate to live on, the time the estate is in probate could become very painful.

Until the state decides, your spouse may not have enough to get by. Do you really want to leave your spouse with inadequate funds, simply because you didn’t want to burden yourself to make out a will?

What does a will solve?

The big things you need to decide in your will are:

Who will be the executor of your estate? This is the person you give the power to carry out the terms of your will.

Who will get your stuff? You spent your entire life accumulating stuff, you should get to say where it goes. And you surely don’t want it to go to your heir’s attorneys. You might have a few special items you would like to go to a particular person. Make sure you have your say in the matter. If you told one child they can have their great-grandfather’s pocket watch, but then they don’t get it because you didn’t write it in a will, how might that change their memory of you?

Who will raise your kids? My wife and I are Christians. It was important to us that if we died, our kids would be raised in a Christian home. Don’t you want a say in who raises your children?

What should you do today if you don’t have a will?

1: Make getting a will a high priority. Set a date to have it completed and get going. One month should be a reasonable length of time to complete this endeavor. If you need to set up a trust, allow three months for the added paperwork.  Start right away, you never know how much time you have left.

2: Make an appointment with an attorney right after you finish reading this article. This appointment will get the wheels moving. Remember that starting is half done.

3: Sit down with your spouse and make the hard decisions about what will happen to your assets, who will raise your children, and who will be in charge of executing the terms of your will.

4: After you finish your will, tell those involved what your wishes are. It will be much easier on everyone if they know your wishes before you die. Also tell them where to find your will so it can be retrieved easily upon your death. Michael Jackson was thought to have died without a will. Then, after much arguing among his heirs, an attorney produced his will. The family might have avoided feuding if they had known which attorney had a copy of his will.

5: When you have a significant change in your life, like the birth of another child, make sure you update your will. There have been many parents who have died with one of the kids left out of the will, only because the will was written before their birth.

I hope this article inspires you to move into the minority of Americans who have a will. There is no excuse for dying without one. Now a days, with easy access to the internet, writing a will has become very easy. You can make your will a reality.

What has been your experience with wills? Do you have a will? How did the writing process go? If you don’t have a will, what’s holding you back? Have you ever inherited anything? Was there a will? Were there any complications?

If you are interested in more ways to get your medical career off on the right foot, pick up a copy of my book, The Doctors Guide to Starting Your Practice Right.

5 thoughts on “Why Don’t Most Americans Have a Will?”